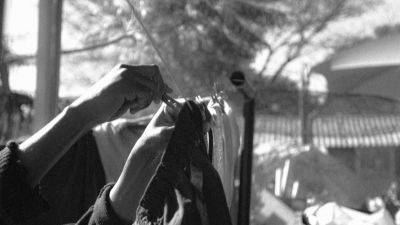 We met Nothemba in 2017 when she was a sex worker and drug addict in Arcadia, Pretoria. Her story starts with a very harsh and hopeless childhood in a poor family in Atteridgeville, one of the townships of Pretoria. She found herself dating different men to survive and as a result ended up with three children from three different fathers, who all denied responsibility and left her on her own, deep in poverty and not knowing what to do next. “I do not know how to express my gratitude to you and PEN; you have helped me enormously. You have taught me to take responsibility for my own life, which I managed to do because of all of you.”

Consequently, Nothemba made her way to the inner City to work in the sex industry after abandoning her children and leaving them with her mother. Following this, she was taken by a group of men to Rustenburg, a city an hour’s drive from Pretoria, where she was sold as a sex slave and paid with drugs. She lived like that for a year, stripped of all dignity, caught in a vicious cycle of violence and fear. After she managed to escape, she returned home, where she was unfortunately met with condemnation, judgement, and rejection. As a result, she found herself back in the Inner City of Pretoria in prostitution.

Through our outreach workers she came to know us and started coming to Women Arise. She was thin, exhausted, high on drugs and dirty, but the collective efforts of our social workers, mentors, health workers and volunteers gave her access to unconditional love, hope and security for the first time since her childhood. We began helping her to rebuild and reclaim her life bit by bit. At the time, we tried repeatedly to reconcile her with her family, but she was continuously met with rejection. Once, she said to me in tears “One day I will be fully recovered, I will have my own home and I will go and get my children so that I can live with them”.

After two years with us she moved to another town, with enough life skills, motivation, and courage to try living again without having to depend on us. She made good progress by herself, with one goal in mind: to reclaim her life as a mother, like she had already reclaimed her life as an individual. In time she entered into a steady, lasting relationship which led to marriage. Later, she came for a visit to give us feedback on how she was doing, namely pushing to take on the next phase of her life. In her own words, “I do not know how to express my gratitude to you and PEN; you have helped me enormously. You have taught me to take responsibility for my own life, which I managed to do because of all of you. I now want to go back to school to acquire a skill so that I can make a stable income for myself and contribute more to my family. As I promised myself two years ago, I have a home and live with my children; and I have a good husband. I want to do for others what you did for me”.

Now we proudly call her an Alumna, our very own heroine.